The workshop is the third and last meeting of the transversal project Marginalised People and the Mixed Economy of Welfare in Europe (1918-1939), which is led by Michele Mioni and Stefano Petrungaro, in the framework of the activities of Working Groups 2 and 3.

Who is in charge of aiding those at the fringes of society? This research project reconstructs the answers provided in Europe between the two world wars, placing under scrutiny the discourses and the practices articulated towards war refugees, war veterans, orphans, mentally ill people, unmarried mothers, young poor girls, migrant women, and the unemployed. Public and private actors shaped the variegated world of the “mixed economy of welfare”, which in many ways characterized the history of aid as well as the social disciplining of marginal people in modern Europe.

Should you want to attend the event via Zoom, please contact Ellianna Farazi (ellianna.farazi@parisdescartes.fr) to get the link.

The project investigates the interrelation between socially marginalised people and those in charge of assisting them: the state, local authorities, and a constellation of voluntary and informal actors. Ten case-studies taken from various geographical areas and social contexts across Europe between 1919 and 1939 address this overarching research question. The case-studies deal with Lithuania, Ireland, Denmark, Norway, France, Croatia, Spain, Italy, Yugoslavia, Czechoslovakia, and Belgium. The contributions focus on three main thematic areas:

All the contributions share some common research questions and methodological issues. Firstly, they explore the variegated world that composed the so-called “mixed economy of welfare”. The book challenges simplistic distinctions between public and private initiatives, by shifting the emphasis to historical forms of collaboration, friction, interactions between socially marginalized groups, non-state actors, and public authorities on a local, national, and transnational level. Secondly, the contributions examine how the “blurred” boundaries of socially marginalised people took shape in interwar Europe, by analysing how public and private social action fostered, formed, and/or hampered the mechanisms of social inclusion and exclusion of some individuals and social groups. Thirdly, the contributions investigate the interaction between assistance and control of the socially marginalised under examination, considering to what extent social aid was affected by dominant ideas and norms concerning moral normalization and social disciplining of the poor and deviants.

The research project puts several European and thematic case studies together, and it thus provides excellent material for a comparative and transnational European view, which includes the interactions between states and voluntary actors as well as centres and peripheries. 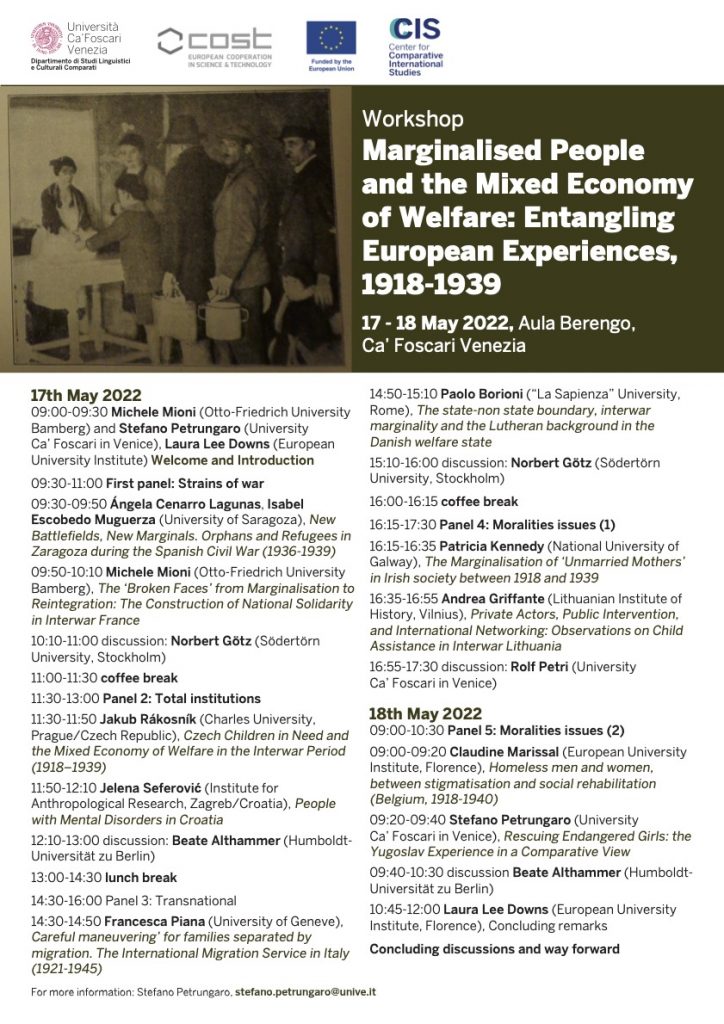