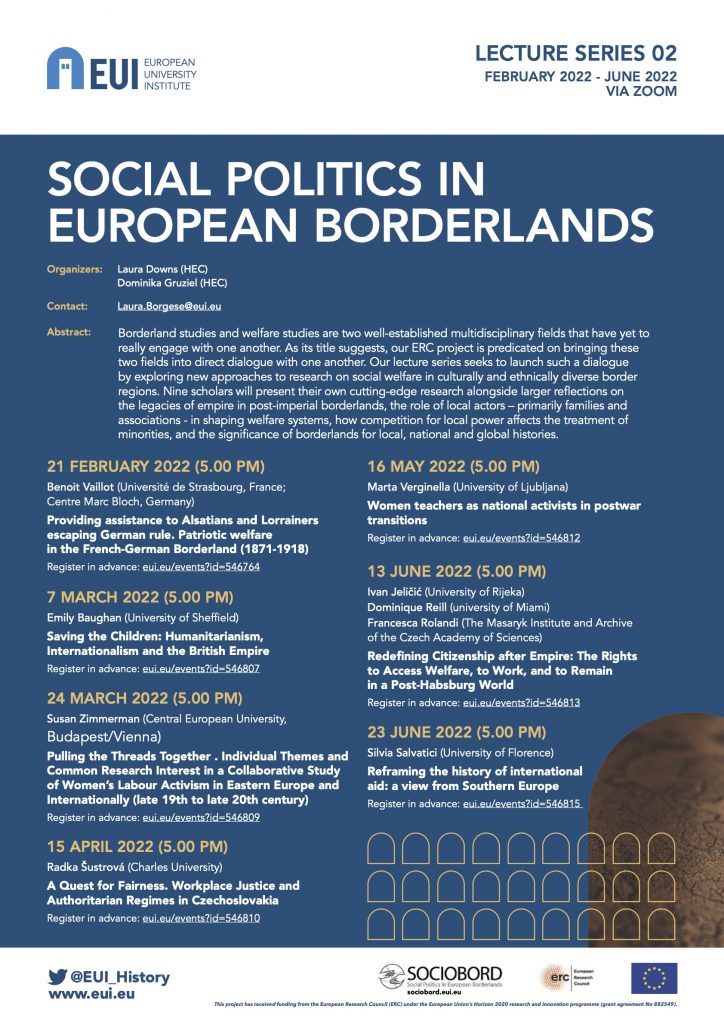 We are delighted to announce the lecture series “Social Politics in European Borderlands, 1870s-1990s: A Comparative and Transnational History”.

The lecture series is organized by Laura Downs and Dominika Gruziel within the framework of the ERC-SOCIOBORD project coordinated by Professor Downs.

The lectures will take place online from February to June 2022.

The upcoming lecture “SAVING THE CHILDREN: HUMANITARIANISM, INTERNATIONALISM AND THE BRITISH EMPIRE” features a conversation with Emily Baughan (University of Sheffield and member of our Action).

The lecture will take place on 7 March 2022 at 5.00 PM via Zoom. To register for the lecture please click here.

Abstract. Save the Children was one of the world’s first self-styled ‘international’ humanitarian organisations. Founded in 1919, it sought to build internationalism via the creation of strong nation states, the promotion of global capitalism and the preservation of the British Empire. Humanitarians saw global stability as being vested in the bodies of the very young. While Save the Children proclaimed a doctrine of universal child rights, it valued children based on their perceived future contribution to global capitalism, and used racial and eugenic criteria to describe this. Told across eighteen counties and 50 years, my book, published in 2021, tells the story of international humanitarianism in  the twentieth century, examining the interplay of local welfare practises and international action. In this talk I argue that welfare practises designed for and gathered from European borderlands between the two world wars were exported by aid organisations into the decolonizing British empire after 1945, where they became a central pillar of imperial designs to halt the course of decolonisation. Doing so, I will illuminate the relationship between precarious nationhood and welfare not just in Europe’s borderlands, but the shifting borderlands of empire.